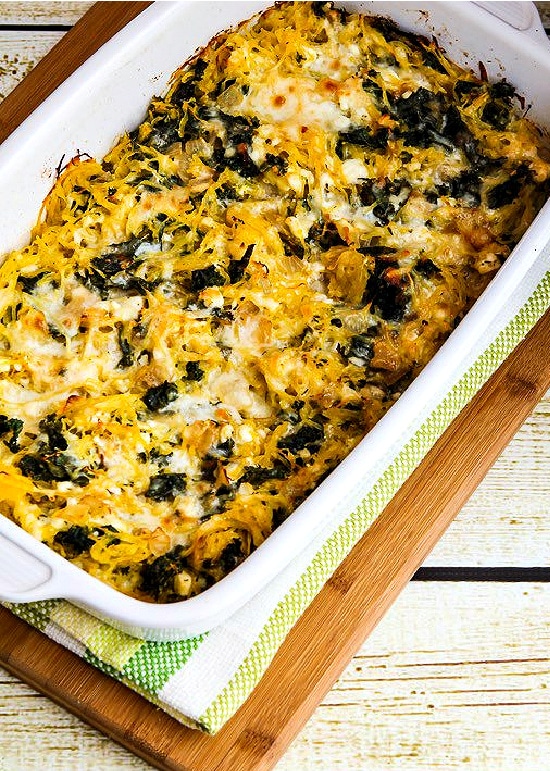 My brother Mark and his wife Lisa have an enormous garden in northern Utah, and recently on Facebook Lisa said they had 49 spaghetti squash to be used! That made me realize I have some good ideas for on the blog, partly from the days when I had a bigger garden myself and used to grow it every year. And I love this cheesy Twice-Baked Spaghetti Squash with Kale and Feta that I came up with when my local store had organic kale on sale, which also happens this time of year.

Most definitely this is a riff on the that’s so popular on the blog, but the generous amount of kale used here makes this feel like a more substantial dish. And if you’re like me, all I have to hear is ; I’m such a fan of that combination. Whether you eat this for a side dish or make it to serve as a main dish, I promise that anyone who likes these ingredients is going to love this combination.

How to Cook Spaghetti Squash:

How to Make Twice-Baked Spaghetti Squash with Kale and Feta:

(Scroll down for complete recipe with nutritional information.)

This recipe has been added to a category called   to help you find recipes you can prep or cook on the weekend and eat during the week!

I'm a huge fan of (affiliate link), but use another all-purpose seasoning if you don’t have Spike.

South Beach Diet / Low-Carb Diet Suggestions: If you’re making this for the original South Beach Diet, they would recommend using low-fat cheese and low-fat cottage cheese. With full-fat cheeses, this would be great for any type of eating plan.

Foody Chum
Disclaimer: This story is auto-aggregated by a computer program and has not been created or edited by Foody Chum.
Publisher: Kalyn's Kitchen